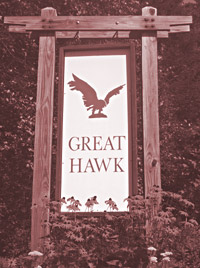 Taken from the booklet “In the Beginning of Great Hawk”
by Robert Carl Williams
architect
Great Hawk Colony, 1994.

In Memory of George Martin

In the beginning of Great Hawk…
there was George Martin, gravelly voice and stout frame with thick,
well-used hands, who was a symbol of Vermont’s distinguished
fortitude and honesty…

A man put a lot of stock in the truth of his words those days…
Some still do.

He was still farming his fine Martin Farms spread north of Rochester town,
aided by Carl, Dean and Elwood, his sons.

Perhaps fortitude at its roots is of only one type, a kind of bearing-up
that’s not self-conscious, like George’s first cow when milk was
$3.00/hundred-weight. She would become the Mother of the finest Holstein herd in the
Rochester valley north of town, if not Vermont.
Of course, Merle’s herd south of town was also prize, and he
“might’a” disagreed.

Well, George began his Martin Farm enterprise with old Bessie (we’ll
call her), farming his small spread with borrowed equipment and
worked his standard farmerly seven-day week, sired a fine family who
all worked the farm, and was the husband to Gertrude, although I
never knew her much.

As the older farmers in the upper Rochester valley retired or died,
George bought up their farms on “credit” mostly, backed up,
according to Dean, by the Northfield Bank.

Credit then was another term for believing what a man told you,
because what George mostly had was his word that he stood behind.

George, when I first met him, was a Selectman and Road Commissioner
of Rochester…that was after “Lefty” Holloway, a retired realtor
from Rutland, took me up the steep Austin Hill Road to show me the
magnificent high valley which would eventually be the Great Hawk
Colony. It was early spring, and a thin covering of snow lay on the
Road; the going was touch and go in Lefty’s maturing Ford, but we
made it up to the land to have a look.

We three sat around George’s kitchen table that afternoon, being
served coffee by Gertrude, who made herself basically invisible but I
figure didn’t miss a word or a stitch. George’s sons, entirely invisible,
were probably milking.

This meeting led on to my meeting one night in the Town Office with
the Selectmen, George, Wesley Young and Gerald Wilbur. We struck
a deal that night that allowed I would open a colony up on George’s land if,
after a couple hundred thousand dollars of improvements, the Town would
“put in” another access road.

Austin Hill was too steep for dependable access during the winter, so I
Thought this single access would impair our undertaking. That night
We agreed in principle and signed a paper so stating.

In the spring of around “68, I believe, we got started with the first
roads in the colony and a model home. I walked the land and laid out
the roads, planning each lot around the characteristics of the terrain.
George retained 30 acres of the first Great Hawk parcel where his
“huntin’ camp” was located. You can certainly appreciate that a
person would not want to “let it all go” at one time.

There were a lot of George’s years in that land, but he liked me and
what we were doing in the valley; I believe this was the reason he agreed to sell to me,
on credit of course, just like George.

Most, if not all, of Great Hawk was pasture at one time, and when we
Brought the land, George was letting the pastures grow up to young maples.

Les Pierce, Tom’s father, then owned Rochester Electric and was
managing the company. Over the time of working together to run in
the lines in the most concealed manner possible, we became good
friends…he was really a beauty and understood exactly what we
were trying to accomplish.

Time and activities went along pretty steady for a year or two until
the colony began to grow in reputation and good-standing both with
the Town and our market which was beginning to find us, primarily
because of good things which were being said of us.

In those days our efforts were well-received and seen as really breaking
new ground conceptually.

The Common Land idea, the individual care in siting our homes, saving each tree
possible and even restricting certain areas near the house where the workmen
shouldn’t walk during construction. This served to preserve the delicate
growth near the house, so the setting survived much of the scarring which
comes along with building.

The placement of power lines was also thoughtfully accomplished, and
the architectural quality of the homes and their blending with the
ruggedness of mountain settings were all new, even radical, though
this may be too strong a word. There were few homes of our type and
quality which were being attempted at all, due to the technical
difficulties presented by the hill-site itself.

Along about here at this point in time I reminded the selectmen of
our agreement, though the select body had new members by this time
who hadn’t been privy to the original agreement. George had died.

Well…you can imagine the stir that this caused…a new situation
which the “taxpayers” would have to “pay for” although the content
of our agreement went something like:

A new road of moderate grade shall be built and seen as an
investment by the Town, in that new homes will create fresh
revenues at nominal expense.

And besides, there was a contract in evidence.

The long and short of all this sugared off when the Selectmen brought
this issue to Town Meeting and threw it open to public debate, just
like old Athens…everybody had his say and hers as well…There
were indeed a few vociferous nay-sayers, one of whom was a woman
well-known in the community.

I rose at the packed Town Hall (all the way out to the street) to show
a few charts about the economics of what we were doing and how our
new Colony would positively impact the Town.

Les held forth also in our behalf although he had already invested a
lot in what he believed would benefit the Town and ultimately would
be profitable for the Rochester Electric company.

I reviewed with the townspeople what our concept of “community”
was and the manner in which we planned to achieve our goals.

During the long afternoon I answered every objection raised with the
soundest reasons I could muster, and after what must have been
several hours of hot, teeth-gnashing debate, the question went to
secret ballot.

We won the day by a hearty margin, so it was a fact that most folks were
squarely behind us, a circumstance which has not changed to this day.

The new road, however, still had to be located and designed, a
considerable task…

Along about this time the Tarbet Farm, a 70-acre parcel adjoining
Maple Hill Road and abutting the southern extremity of George’s
“huntin’ camp” land, came up for a”blind bid auction.” This meant
that the bids would be sealed and the highest bidder would win the
bid, although none of the bidders would know who or how much he
was bidding against.

The Martin boys wanted this land about as bad as we did to tie on to
the 30-acre camp land. I figured they were the ones to beat…
I can’t recall exactly how much we bid that day, but I do remember
calling to my young messenger down the hall who was leaving with
the bid to add another $50 to our price, “just in case.”

Well, we won the bid by “that” $50 and hence tied on the 70-acre
Tarbet Sector to the original sector bought from George and the Martin sons.

Although we won that particular day from the Martins on the
battlefield of commerce, they would eventually get even when we
finally purchased the camp land.

The men were and are dignified gentlemen as well as worthy
opponents in trade, commanding my highest regard.

The sons granted us the right-of-way along one edge of George’s camp
land, and thus came into being the Maple Hill access to Great Hawk,
but not without its own unique drama.

Recent legend has it that when the new access construction got under
way, the trucks were rolling one spring day, and the bulldozers were
pushing when it all stopped dead in its tracks. I wasn’t up at the site
that day, but word has it that our “ardentest” detractor had laid
herself out square in the road, thus linking herself securely to the
sound principles of civil disobedience in a style that Henry David
Thoreau would have smiled on.

After due time and a sufficient cajoling, I think they finally got her
up out of the road because the road went through.

Over the years the Colony flourished with George’s “camp” right in
the middle, and along toward the completion of the Colony we
purchased George’s camp from the Martin gentlemen, took down the
“camp” with the reverence of a burial (at least in my mind) and
unified the area into the one-of-a-kind Great Hawk Colony.